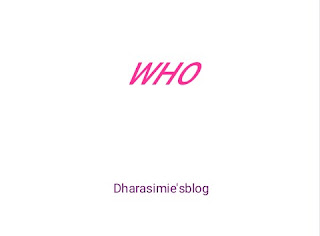 WHO PART2 this is a story full of suspense

Finally she could scream all she wanted, waking even the tinniest ants. The girls jumped from their sleep, so scared, so confused. "What happened?" they asked, "I saw... I saw" Tope stuttered. "What did you see?" Lara screamed at her and so did the others.

"I saw a ghost, it covered my mouth and said we should leave right now" she replied. The girls paused in silence, stared at one another and burst into laughter. "You're high" Made said, "maybe she needs some sleep but why are you awake by this time?" Lara said facing Tope. "Guys please believe me, I know what i'm..." Rukky cut her off before she could say more "shhh" apparently she noticed Shayo hadn't woken up yet. "Shayo" Rukky called but she didn't answer. They all knew Shayo wasn't a heavy sleeper, her being numb bothered them. She moved closer "Shayo" and tapped her this time. She went quiet, looked at the girls and said "she's cold". They all rushed to where Shayo laid, shook her, screamed her name countless of times but all facts still remained unchanged. Shayo was cold and stiff, she was gone...
Totally eluding what Tope had said, they mourned in the middle of the night, wailing and crying like motherless kittens "Shayo was gone". Suddenly they all felt like their head would burst, it was here again and this time they could all see it. Still retaining its black attire, it spoke, so loud yet so unclear "Leave! Or end like your friend" and disappeared again. Forgetting everything about Shayo, they flew out of the hut and ran as fast as they could. It was so dark, they ran into trees, tripped over stones and timber. It seemed like nature was against them. Rukky and Lara stopped to catch their breath, they had been together the whole time with no idea where the others passed. "Where's Made and Tope" Lara asked, breathing heavily. "I don't even know" Rukky replied. "Where are we now? How do we get to the town? God help us o" they cried in unison to the only person that could save them at that moment.
Made and Tope on the other hand were not too lucky, Made kept slowing Tope down, they didn't get too far. "Stop! Stop" Made cried, calling Tope's attention. She had tripped and sprained her ankle, she could barely walk. Their night had turned sour. "How did this happen?" Tope asked as she bent over trying to access the leg. "Its just a little sprain" she added, being a medical student she knew what to do. "Stay still" she said and tried working her magic, unfortunately the pain was too much for Made to bear, she passed out. "Oh no! Made wake up! Made!" she screamed, it was too dangerous to stay at a particular place for a long time. "God, what do I do now?" She had lost hope after all her efforts to resuscitate Made fell through, she finally sat on the ground and awaited the worst.

Hours later, it was still nowhere near dawn, Rukky and Lara walked aimlessly in the dark forest hoping they would see the light of the day and probably a God sent Samaritan. Suddenly they heard some noise from afar, "not again!" they cried. They couldn't tell or see what was making the funny noise so they walked as slow as a mice before a cat. "Help!" They could finally make out the words. Someone was crying for help, the possibility that it could be one of them being harmed heightened their adrenalin, they were prepared. Only to see Made sitting helplessly on the ground with a swollen leg. They rushed to her aid but bombarded her with questions still. "What happened to you? Where's Tope?". She started " well I think I fainted when she was trying to treat my leg and when I woke up she was gone, i just hope she's okay". Where did Tope go to? Well no one knew and there was nothing that could be done either. In the absence of nothing, they held hands and prayed. That was enough hope for them.
The sky was brighter and that was a good omen, at least. She opened her eyes, the last thing she remembered was sitting beside unconscious Made with no idea how she got here. "Where am I? " she managed to squeak, she looked around, everywhere was covered in red cloth. "Blood of Jesus!" she screamed continuosly. "Shut up, you miserable peasant" a voice said. "Have you forgotten our covenant" it said, she couldn't see who was talking, she could only hear its voice but she knew what and who it was. "I had no idea it would be like this, you were supposed to take all of them at once not create an immature jungle race" Tope replied the creature as she stood from the ground and walked majestically around the whole shrine. I was shocked as well, the holy saint Tope was the stone in water. "I changed my mind, I've decided to use you instead.  Something is protecting them and I can't seem to touch them as much as I try" the creature said. "Me? That's impossible! I summoned you here, you go by my order" She said, shocked to the marrow. It finally appeared and walked towards her, step by step before it answered "Watch me"...
Posted by Unknown at 1:00 PM
Email ThisBlogThis!Share to TwitterShare to FacebookShare to Pinterest

Jumia deal of the day